The Australian Ice Hockey League (AIHL) was formed for the 2000 season by the Sydney Bears, Canberra Knights and Adelaide Avalanche after the failure of the former national league.

From 2000-2001 the thee teams played round-robin weekends spaced out over the season, with the top two teams playing a single final. In 2001 the revered Goodall Cup ceased to be contested at a separate tournament, and with the expansion of the AIHL to six teams in 2002, became the prize for the AIHL's Finals.

The Adelaide Avalanche won the AIHL championship in 2000 and 2001, while the Bears won the Goodall Cup in the 2001 Goodall tournament.

In 2002 the addition of the Melbourne Ice, the West Sydney Ice Dogs and the Newcastle North Stars made the AIHL a much more purposeful league. The Sydney Bears were 2002 AIHL & Goodall Cup champions, the first time the two were combined.

In 2003 a new finals tournament weekend was introduced, where the top four, not just the top two, teams would play sudden death semi finals on the Saturday and the winners would play for the Goodall Cup and AIHL Championship on the Sunday. This format is unchanged up to now.

The Newcastle North Stars were the 2003 winners, with the West Sydney Ice Dogs winning it in 2004.

In 2005 the AIHL expanded to eight teams, the two newcomers the Central Coast Rhinos and the Brisbane Blue Tongues. 2005 Champions were the Newcastle North Stars.

The same league structure continued through to 2008 season. In 2008 the Adelaide Avalanche folded and a new team, the Adrenaline was founded in its place. 2006 Champions were the Newcastle North Stars, in 2007 it was the Sydney Bears, and in 2008 it was Newcastle North Stars again.

In 2009 the Brisbane Blue Tongues moved to become the Gold Coast Blue Tongues, and had their first ever finals appearance. The Central Coast Rhinos declined to accept the AIHL's new licencing model and the AIHL became a seven team league until 2011.

2009 Champions were the Adelaide Adrenaline, and in 2010 the Melbourne Ice became champions in the new Australian Olympic ice facility in Melbourne's Docklands.

The Goodall Cup was withdrawn from the AIHL in 2009 by its caretakers, Ice Hockey Australia, so it could return to being contested by the states. A new trophy was awarded to the Adelaide Adrenaline, now known as the H Newman Reid Trophy. In 2010 the Goodall Cup was returned as the AIHL's prize, and the new trophy consigned to be the prize for the regular season's top team (minor premiers).

In 2011 the league has returned to a team strength of eight with the inclusion of the Mustangs Ice Hockey Club, who will also play from the Docklands rink in Melbourne.

The Perth Thunder played exhibition games as a provisional team in 2011, securing a spot to become the ninth AIHL team in 2012.

The Brisbane Blue Tongues exited the AIHL in 2014.

History of Ice Hockey in Australia

The first rink in Australia was the Glaciarium Ice Palace in Hindely St, Adelaide, where the first games of bandy were played, basically field hockey sticks were used with a ball on the ice.

WAKE UP! Aussies in Adelaide in 1904 were enticed by H Newman with an ad in the Adelaide Advertiser to wake up to the luxury of ice skating in their city at the Glaciarium Ice Palace. Image courtesy of Legends of Australian Ice.

In 1904, there appeared on the board at the Glaciarium Ice Palace, a notice convening a meeting of any skaters interested in the introduction of a new form of amusement on the ice. The meeting was duly held, and it was explained to the assembly the idea was to play a game on the rink akin to roller polo. The rules to be adopted were based on that game and the implements used were to be the same. The idea met with general approval, and thus the game of "Hockey on the Ice", as it was then called, was launched on a tiny oval-shaped skating circuit with a post in the middle to hold up the roof!

At the meeting was H Newman Reid, developer of the experimental Adelaide rink, and also the Melbourne rink a few years later in 1906, the birthplace of Ice Hockey in Australia. Two of his sons, Andy and Hal, were also present and all three were destined to have great influence on the fortunes of the game.

Organised hockey games more like the Canadian rules were begun when rinks opened up a few years later in 1906 in Melbourne, then in Sydney.

In August 1907, the Victorians discarded the bandy ball for a puck in two games of hockey against the touring Canadian lacrosse team played before a large and fashionable audience. The next season, quite a few matches were played, the touring American fleet sent teams ashore, and the visiting Canadian cadets played games. The first women's ice hockey was also played and the International Ice Hockey Federation was founded.

Between the closing of the rink in 1908 and its re-opening in 1909, the Victorian Ice Hockey Association was formed with Andy Reid among its founding members, and four ice hockey teams — Glaciarium, Beavers, Brighton and Melburnian. These were the first ice hockey teams in Australia and the first association.

In 2017, Australia is ranked 33rd in the International Ice Hockey Federation's (Men's) World Rankings, and 27th in the Women's World Rankings.

At the end of the season in1909, the year after Canada's Allan Cup, New South Wales sent its first team to Victoria. It was a fast but inexperienced tournment, and the Victorians, captained by Bobby Jackson were the first winners of the newly presented interstate trophy. It came to be known as the Goodall Cup after its donor, the Melburnian player, John Goodall. 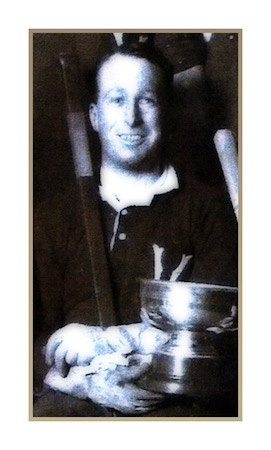 Jack as he was known, was a pretty fair hockey player, rated one of the best cover points in the game. In those days the team lined up with three forwards and a man directly behind the centre man, and then a man behind him again.

The original Goodall Cup sits atop two rings of winners plaques and a timber base. The original now resides in the Hockey Hall of Fame in Toronto, Canada. Image courtesy: Legends of Australian Ice.

The original Cup was partially restored by 2003 winners Newcastle in 2004, then it was further restored and remounted on an impressive Stanley Cup style barrel base in 2007-2008.

Considered too precious to travel, a replica was made of the original in 2009 and on the Goodall Cup's return to the AIHL in 2010, was awarded to new champions the Melbourne Ice.

The replica Goodall Cup will be housed at the Docklands ice rink for the next three years or more, as Australia's ice hockey showpiece.

The original Goodall Cup is now kept on display a the Hockey Hall of Fame in Toronto, Ontario, Canada.

Following the removal of the Goodall Cup from the AIHL in 2009, the AIHL commissioned the design of a "new tradition" trophy. With a modern three-tiered design raising from a circular base to a glass puck mounted on top, the trophy was a big departure from the century-old pewter Goodall Cup.

For 2010, the trophy was renamed the H Newman Reid trophy in honour of the man who opened the first ice rinks in Australia and who's family fostered ice sports in Australia.

The previous minor premiership trophy was known as the VIP Cup and was last awarded to the Adelaide Avalanche in 2007.

Melbourne Ice were the first team ever to win both the Reid and Goodall trophy in the same season, doing so in 2011.